From Renaissance to Baroque

“The abbey church dedicated to S. Maria Assunta was built in Renaissance style at the end of the 15th century and consecrated on 23 October 1496.” 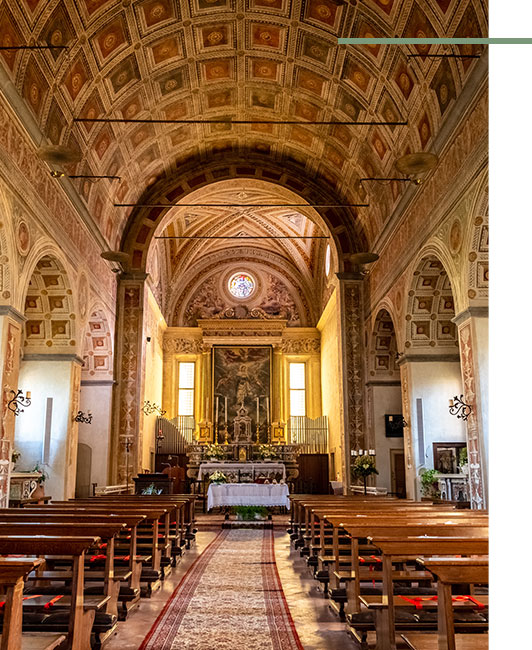 The abbey church dedicated to S. Maria Assunta was built in Renaissance style at the end of the 15th century and consecrated on 23 October 1496. The grey stone facade has a very simple design, its only decorative element being a large rectangular window from a later period. The bell tower in Romanic style was begun in 1609 and finished in 1641. The balustrade of the churchyard dates back to 1746. The interior of the church has a single nave with painted decoration on the barrel-vault ceiling. Light enters the church through eight arched windows. In addition to the main altar, there are seven altars in polychrome marble, partly in Renaissance and partly in Baroque style.

The church was damaged during the earthquake that hit Lake Garda in 1901. During the restoration work, the plaster that had been superimposed on the walls during the plague of 1630 was removed and valuable decorations dating back to the early 16th century came to light. The most important works of art are: the late 15th century fresco representing “The Madonna on the Throne with Christ”; the baptismal font in the shape of a chalice built after the plague of 1630; the wooden crucifix executed by Paolo Amadore at the age of 20 in 1613; the 1741 main altar in inlaid marble in Baroque style on which a pelican stands out in the act of feeding its baby birds with his blood; the 15th century silver processional cross; the altarpiece depicting the Assumption of Mary in the apse painted in 1552 by Alessandro Bonvicino, known as Moretto.

The legal wrangling over its possession is linked to this altarpiece.

In 1863 the owner of the abbey sold it for 30,000 lire, but the mayor of Lonato confiscated it on the night of April 30, 1868 and took it to the town hall. In 1871 the Court of Brescia, to which the owner had appealed, ordered the mayor to put the altarpiece back in the church of Maguzzano. The Minister for the Treasury, the Department of Justice and the Minister of Cultural Affairs obtained from the Court of Brescia a sentence by which it was decided that the painting should remain the responsibility of the parish church of Maguzzano. However, on 7 April 1896 the Prefect of Brescia ordered its requisition and the director of the Pinacoteca di Brescia, escorted by the carabinieri, took it to the museum where it remained for years in a cellar. The parishioners of Maguzzano insisted that it be returned and so it was: on Assumption day, August 15, 1953, the canvas returned to the apse of the church where it has been possible to admire it ever since.