The abbey of Maguzzano dedicated to Santa Maria Assunta

“The abbey of Maguzzano, dedicated to Santa Maria Assunta, is located in the Municipality of Lonato, in the area that directly overlooks Lake Garda.” 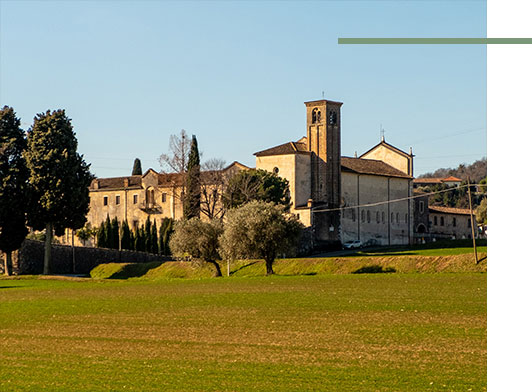 The current architectural complex was built in 1493-96 by the Benedictine monks of the abbey of Polirone (Mantua). Its origin, however, is much older: the first small abbey (“abatiola”), traces of which are found in the documents and stone finds exhibited in the museum, dates back to the 9th century. This abbey was destroyed in the early ‘900s during the last barbarian invasion of the Huns-Hungarians. It was rebuilt by Raterio, bishop of Verona, who recognized the importance of its function.

With time, the abbey, masterfully managed by Benedictine monks who worked the land and performed the liturgical service, extended its properties to the surrounding territory and organized itself as a small fiefdom at the top of which was the abbot. In addition to the friars there were the families of the settlers, who worked in the properties of the abbey. In order to allow the people of the area to follow religious services, the church was built outside the abbey, as is customary in the Benedictine tradition.

After the year 1000, following the evolution of society, the fiefdom became a free monastic municipality.

Throughout the 14th century, the abbey was basically abandoned in consequence of continuous looting by local lords. It was rebuilt in the following century, and continued its life without interruptions until the end of the 1700s, becoming increasingly important and wealthy, and rich in valuable works of art.

At the beginning of the 15th century the territory passed under the glorious Republic of Venice. During a long period of absence of wars, the abbey lived peacefully and prosper until the end of the 18th century. After the French Revolution in 1797, General Napoleon Bonaparte, who defeated the Austrians, signed the Treaty of Campoformio and became the Ruler of the territory. In need of money to support the costs of the war, he issued in Mantua a decree to suppress most of the religious properties of the territory he had conquered. The friars were driven out from the abbey which was suppressed and sold at auction. For over a century it remained deserted, being inhabited only by a peasant family.

In 1906, the rather dilapidated abbey was bought by the French Trappist friars from Algeria, who made it flourish again. They planted vines and produced a wine which became famous for the celebration of the holy mass. They built a cellar, a school and the cemetery, but they did not stay for long. For various reasons in 1938 they decided to sell the abbey and retire to the monastery of Aiguebelle in France.

The year before, Don Giovanni Calabria, who had come to Maguzzano as a guest of the Trappist friars, learned of their intention to sell it. He had the idea of making it into a host community for the reunification of separated Christian brothers and an aid centre for priests in difficulty and for poor children. His wish came true thanks to the generosity of two wealthy sisters from Lonato.  Today the abbey continues to provide its religious service through the Poor Servants of Divine Providence. 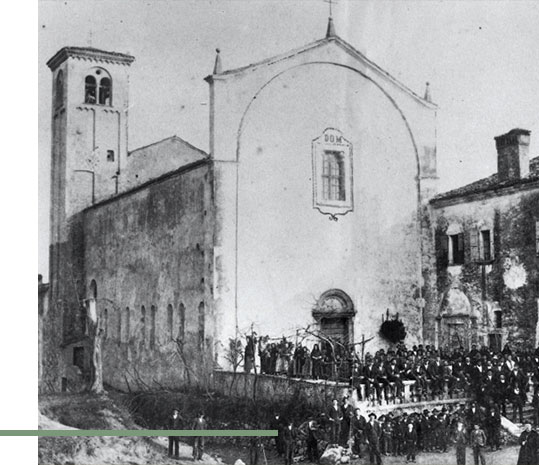